ASU MEMBERS DELEGATION TO MEET WITH STATE MEMBERS OF PARLIAMENT 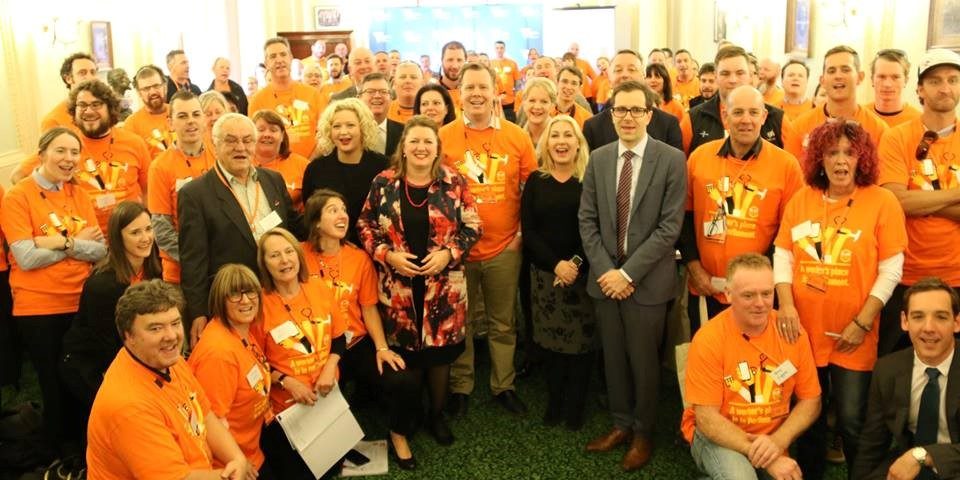 A large group of 60 union members from across 16 different Unions visited State Parliament on Wednesday, 25 May, to talk directly to State MPs about Insecure Work.

The ASU team was led by Assistant Secretary, David Leydon.

Premier Daniel Andrews addressed the workers at the start of the day and then Unions were able to meet with key State Ministers and MPs to tell their stories of how their lives are affected by the insecure nature of their workplace.

Long time ASU delegate Helen Grover told the MPs about her workplace, Tenix Solutions. Tenix hold the contract with the State Government for the enforcement of Police “on the spot” and camera fines.

This contract is up for renewal every 3 to 5 years. This provides a huge amount of uncertainty and insecurity for workers at Tenix. If the contract is not renewed then the workers are out of a job.

The ASU delegation also spoke to MPs about other workplaces who have a working relationship with the State Government, including Transurban who run the huge Citylink road network.

The ASU has many members at Transurban who also feel insecure in their jobs. Some two years ago Transurban sent a lot of their work offshore to the Phillipines and some 35 employees lost their jobs.

The Union is currently negotiating a new EBA at Transurban. We have sought some certainty about the future of our members jobs and asked Transurban to give guarantees in the new agreement that:

We have also sought some improvements to the redundancy arrangements in the agreement.

Transurban have refused to give any guarantees about jobs and refused to improve the redundancy package. This makes employees at Transurban feel like their jobs are insecure.

These were the messages our delegation and all other Unions delivered to the State MPs.

“It was great to be able to bring real workers from real workplaces down to Parliament House to talk directly to their MPs. Our members got to give their first hand accounts and experiences directly to the politicians. The ASU will always fight hard to protect our members and win security for their jobs”.

One off Public Holiday for the mourning of Queen’s passing
September 12, 2022
Vote NO at TIO
August 29, 2022
Virgin EBA Log of Claims
July 22, 2022
Unite Magazine – Federal Election, Autumn Edition 2022
May 2, 2022
Qantas: We need more staff, not overseas call centres
March 31, 2022
ASU is fighting to improve your working conditions in your next Qantas Enterprise Agreement
March 30, 2022
Go to Top