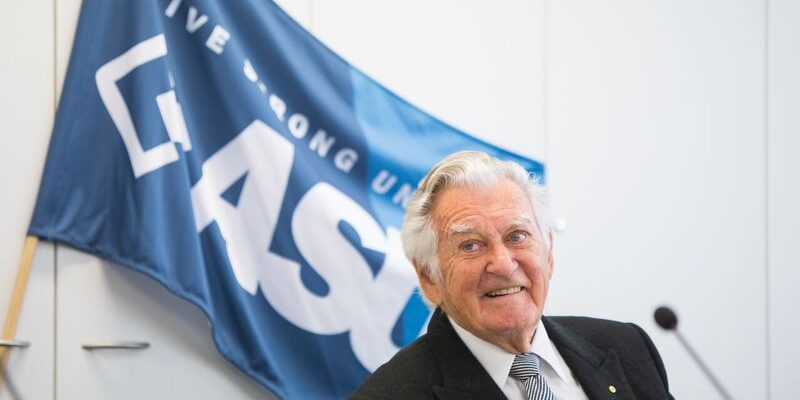 This week the ASU presented a great Australian with life membership of the union.  Bob Hawke joined the Federated Clerks Union Victorian Branch (now the ASU Victorian Private Sector Branch) in 1958 when he became an Advocate and Research Officer with the ACTU.  Bob has been a continuous member of the union since that time, including during his time as the longest serving Labor Prime Minister of Australia from 1983 – 1991.

Before he entered the federal parliament, Bob Hawke’s leadership of the Australian union movement saw many gains for workers that we all still enjoy today.  Delivering for working people was also a major feature of the Hawke Government with transformative reforms such as:

At the life membership ceremony in Sydney this week, Bob Hawke talked about his love affair with the trade union movement and congratulated our movement for raising and protecting the living standards of every Australian.

You can read Branch Secretary Ingrid’s Stitt’s speech here.  The ASU is enormously proud and honoured to be able to present Bob Hawke with life membership of the union.

One off Public Holiday for the mourning of Queen’s passing
September 12, 2022
Vote NO at TIO
August 29, 2022
Virgin EBA Log of Claims
July 22, 2022
Unite Magazine – Federal Election, Autumn Edition 2022
May 2, 2022
Qantas: We need more staff, not overseas call centres
March 31, 2022
ASU is fighting to improve your working conditions in your next Qantas Enterprise Agreement
March 30, 2022
Go to Top